HOW DOES IT WORK AND HOW IS IT DIFFERENT?

ANECO® units have been conceived and developed, based on innovative, unique technology, to effectively deliver electro-activated solutions (Aneco® and Cateco®) with biocidal and detergent characteristics that are still unmatched to date.
In addition to the environmental and ecological benefits, in terms of reducing the use of chemicals, dosed in water, the economic benefits make ANECO® generators particularly attractive to agriculture, livestock farms, swimming pools, the food processing industry, and all industrial and civil sectors that suffer from the problem of residual and drinking water safety from bacterial contamination (e.g., Legionella).

Electrolyzed Water (EA) technology is based on a new, previously unknown law of electrochemistry concerning the processes of abnormal changes in the reaction and catalytic capacities of aqueous solutions subjected to unipolar (anodic or cathodic) electrochemical treatment. EA is necessarily associated with the alteration of its chemical composition, acidity and (or) alkalinity with a wide range.
That is why EA application makes it possible:
• Exclude from routine technological processes the adjustment of solution properties with expensive reagents;
• Improve the quality of treated substances;
• Reduce the number and duration of technological operations;
• Decrease manpower;
• Facilitate and simplify water and sewage treatment processes. 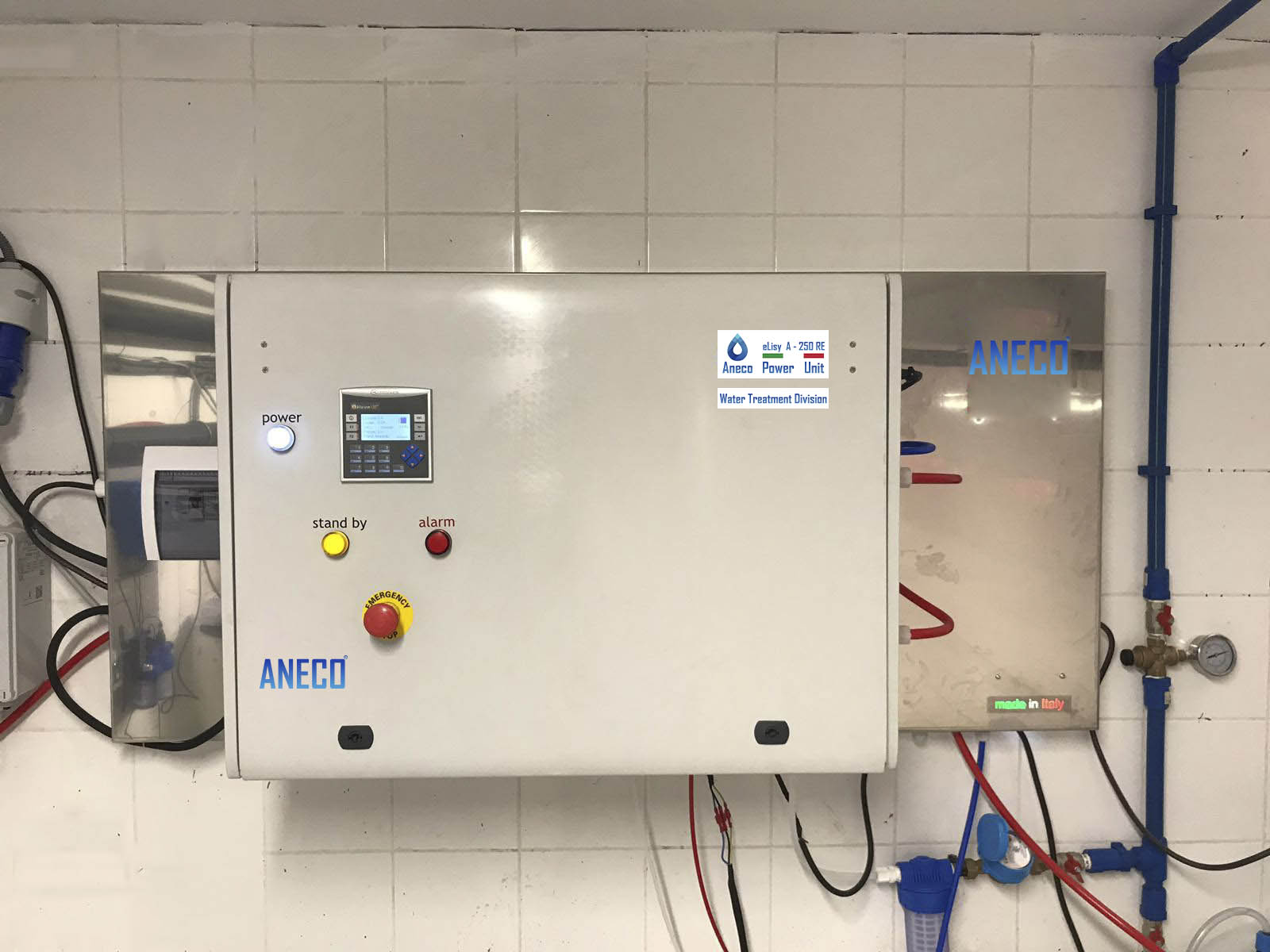 The ANECO® system consists of an electrolytic cell containing two electrodes, an anode and a cathode, separated by a ceramic-diaphragmatic membrane. The probable problems of electrode degradation found in other similar systems today have been overcome by a unique process of electrical management through complex electronic systems and the quality of alloys selected over time.
A self-cleaning process was designed that minimized the use of acids in cleaning the electrodes, thus ensuring their significantly longer life. The system is operated by an external screen (PLC), which can be controlled remotely where required. The electrolysis cell, or reactor, is the heart of the system.
The use of diaphragm cells also enables very rapid production of Aneco® and Cateco® products.
ANECO® units are designed to produce solutions with different characteristics. They can operate independently and/or be integrated into a production process:

• Automatic eLisy units (A), combine the benefits of the ANECO® generator with the convenience of an automatic start-up and shut-down system with level control, easier and simpler operations, cleaning and maintenance, and more sophisticated controls. Automatic units can produce up to 40 m3 of Aneco® per day. A simple switch allows production activity to begin on site. For greater efficiency, an automatic system is installed to report cell cleaning needs;

• Low salt and energy consumption units, specifically developed to produce significant volumes of solution at the lowest operating costs that are possible today, are available on all models. [M-LC and A-LC line];
• The SW (Sea Water) line consists of units designed to be supplied with sea water. Ideal for use in near-sea facilities or on boats, they require almost no brine;
• The design of the electrolytic cell, based on the revolutionary ECA (Electro Chemical Activation) technology, is a guarantee on the performance of the generated solutions. It allows reduced consumption of electricity and sodium chloride (NaCl, normal table salt);
• Hydraulic resistance of the flow of brackish water passing through the cells is minimal, so as to eliminate any cause of, possible reduction in the effectiveness of electrolysis during production;
• The container is made of corrosion-prone material; the connections are made of PVDF, which have known corrosion resistance even against very aggressive products.

The system collects mains water that is combined with brine, the brine solution passes through the reactor generating two products that according to need are fed back into the mains through a metering pump.

HOW DOES IT WORK ?
Each ANECO® water disinfection system includes:
→ eLisy device (one or more) ;
→ Containers for Aneco® solution and NaCl (Common table salt) ;
→ Dosing pump(s) with FAC or ORP controller.
The Aneco® produced by the ANECO® unit is collected in a container and then dosed into the incoming water of the system. The dosing regime depends on the flow rate and water quality (properties) of the source water and is controlled by a flow meter or FAC/ORP readout system connected to the dosing pump(s).

HOW IS DISINFECTION ACHIEVED ?
The aqueous solution of NaCl (brine), electrochemically activated in the ANECO® unit, generates a potent, nontoxic, and nonhazardous disinfectant called Aneco®, which is the active disinfectant ingredient generated by any eLisy unit.
Aneco® is a colorless clear liquid with a slight chlorine odor in its concentrated form.
It contains several mixed oxidants, mainly hypochlorous acid, which give Aneco® highly bactericidal and sporicidal activity.
.

Aneco® parameters are as follows:
• pH da 2,5 a 9,0;
• Concentration (general) of active chlorine 100-2000 mg/l;
• Strong oxidative activity at low concentrations of active substances that do not harm the chemical and other vital characteristics of treated water and do not form toxic compounds.

Complete the following form and tell us about your project. We will contact you as soon as possible