The ultimate expression of this technology is Aneco® NEUTRAL: Although most electrolytic devices produce sodium hypochlorite, our technology allows for an effective and low-impact solution with a powerful hypochlorous acid even at alkaline pH. Our technology combines the optimal characteristics of a high oxidizing capacity with a non-aggressive pH towards human and animal cells and towards nature and all living-things.

Aneco® Neutral is composed of hypochlorous acid (HClO) in addition to hypochlorite ions, chlorine dioxide, ozone, hydrogen peroxide and dissolved oxygen: a mixture impossible to obtain in the laboratory by the simple composition of the different elements. 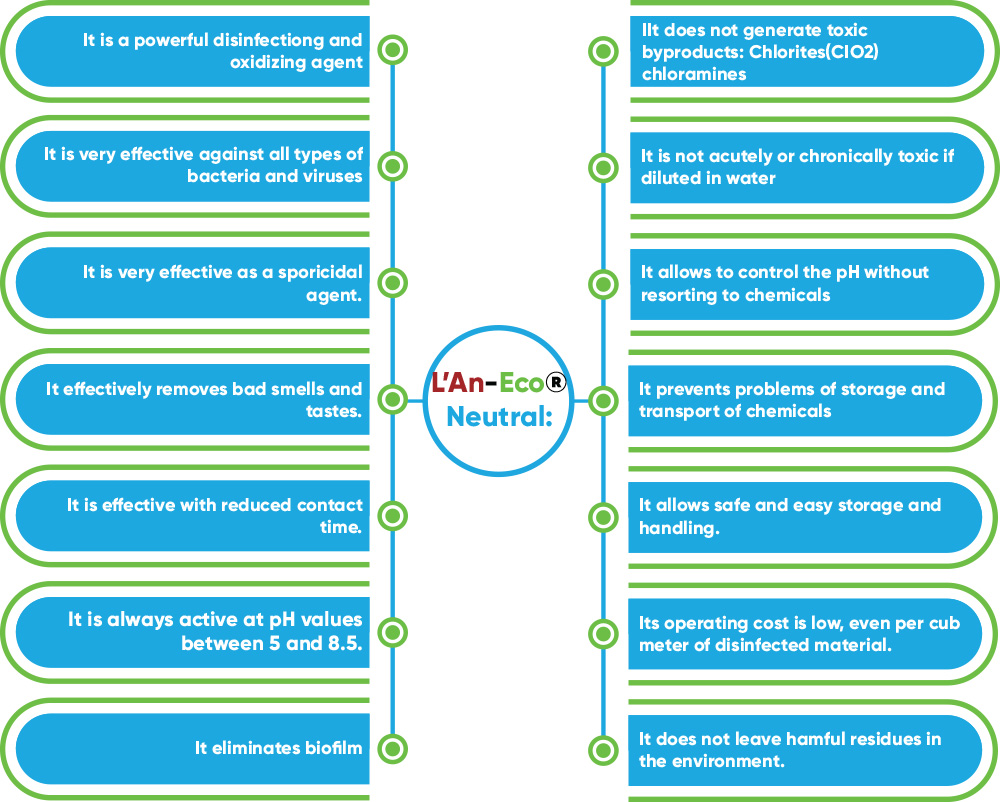 Aneco® Neutral is used in any case of high pH (corrosion) and where possible evaporation of chlorine cannot be avoided.
Aneco® Neutral is very effective against bacteria and viruses and it is used primarily to disinfect swimming pools, drinking water and other water sources.

Aneco® is a clear, colorless liquid with a slight smell of chlorine. It is mainly composed of hypochlorous acid (HClO) and hypochlorite ion (OCl-) which confers superior sporicidal biocidal activies.

Electro-activated substances, such as hypochlorous acid (L'Aneco®), comply with the directives CE 98/8 and 03/2032 and the subsequent directive no. 528/2012 concerning the marketing of biocidal liquids in the European market.

The ultimate expression of this technology is Aneco® NEUTRAL: Although most electrolytic machines produce sodium hypochlorite, our technology allows for an effective and low-impact solution with a powerful hypochlorous acid even at alkaline pH.

Our technology combines the optimal characteristics of a high oxidizing capacity with a non-aggressive pH towards human and animal cells and towards nature and non-living things.

Aneco® Acid is a clear, colorless, biocidal liquid with a slight smell of Chlorine.
It is composed mainly of chlorine (Cl2) with a low pH and a high ORP. These characteristics confer a superior sporicidal and biocidal capacity.

• Electro-activated substances, such as hypochlorous acid (Aneco®), comply with the directives CE 98/8 and 03/2032 and the subsequent directive n ° 528/2012 concerning the marketing of biocidal liquids in the European market.

SEE THE DIFFERENT SPECIFICITIES OF An–Eco®

Until now, HClO has been simply considered a short-lived product of the ubiquitous chemical family of chlorine. However, HClO produced by ANECO® technology generates fewer negative hydroxides than the previous chemical HClO formed by dissociating hypochlorite sodium. For this reason, the HClO produced by ANECO® behaves uniquely and must be considered separately from chlorine or any other related products.

HClO as a chemical itself is different from chlorine and it has never been available in the market. This important advance therefore implies the need for a paradigm shift in the biocides approach.
HClO is a highly valued “old" chemical, but a “new" product is now available as a solution generated in situ. 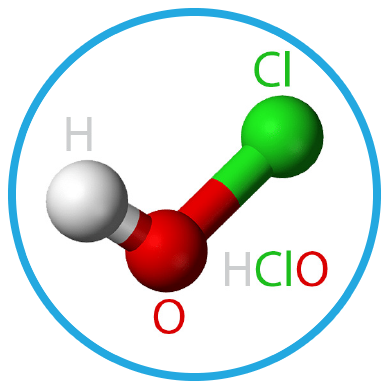 One of the best signs that the demand for chlorine has not been met is the strong smell of Chlorine perceived in the treated water.
If a chlorine solution does not contain enough HClO to satisfy the chlorine demand on the surface or in the product to be disinfected, chloramines will be formed from the combination of chlorine and nitrogen-based materials.

Examples of nitrogen-based substances are proteins and blood.
Chloramines are responsible for the unpleasant smell sometimes associated with chlorine disinfection. The unpleasant, pungent and irritating odor of chloramines, mistakenly identified as free chlorine, indicates that chlorine, after the water / chlorine mixture, is not effective.
There is not enough HClO to meet the demand for chlorine.

In water, chlorine is divided into two forms: hypochlorous acid and hypochlorous ion (OCl). At high pH, the chlorine obtained from bleach contains a maximum of hypochlorite ion.
The chlorine produced in situ by the eLisy generators from

At the same time, the higher the pH is, the less biocidal capacity to remove contaminants effectively.
According to studies at the University of Illinois, HClO is a biocide 120 times more effective than the chlorine ion OCl-. The ideal pH of an Aneco® disinfectant solution from ANECO® is 6-7.
Most solutions of FRESH Calcium hypochlorite, for example,

have a pH of 7 to 8. ALL solutions (fresh or old) of sodium hypochlorite (“bleach") have a pH of 10.25 +, NOT PRODUCING HClO at all. ! These solutions produce only OCl- ions, a bad disinfectant, 80 to 120 times less effective than Aneco® (HClO), supposing that there is no residual chlorine in the solution.

that other methods will also be needed to remove microorganisms.
The contact time is directly related to the effectiveness of chemicals in the removal of bacteria and viruses present in the water.
Aneco® (HClO) requires a much shorter contact time than any other chlorine-based product to achieve 99% destruction, e.g. E. coli (Reynolds).

4. Duration and addition of caustic soda:

Just like champagne or sparkling water, which “stop fizzling" when the calcium carbonate bubbles get dispersed in the air, chlorine escapes from the hypochlorite solution, weakening its biocidal value. In order to slow down this leak, producers of sodium hypochlorite add sodium hydroxide (caustic soda) to their products, which causes a considerable increase in pH.
Caustic soda burns animal and vegetable tissues; it saponifies

(transforms) the fats of poultry and meat. The Aneco® hypochlorous acid provided by the elisy systems of ANECO® DOES NOT CONTAIN CAUSTIC SODA.
According to the results of the tests, examinations and analyzes identified by all the technical and scientific literature, with the consideration of the storage conditions, all solutions of sodium hypochlorite lose half of their strength in less than thirty days. Light, temperature and time are the main factors.

According to what is generated by tests, examinations and analyzes, reported by all the technical-scientific literature, it is recommended, if one uses “bleach", to carry out daily tests in laboratory to check the bleach’s strength.
All what has been written so far is not produced with Aneco®, because it is generated in situ, on demand and on need.
ELisy systems from ANECO® produce maximum hypochlorous acid, thanks to an in situ electrolysis process of the brine in which the pH can be regulated and controlled with precision, between 3 and 9.

1. At a pH of ~ 5, the hypochlorous acid solution is composed only of available free chlorine and allows maximum disinfection.

3. Since hypochlorous acid occurs in situ, it is not necessary to mix or dilute sodium hypochlorite solutions with unknown chlorine content.

Duration is not an argument because hypochlorous acid solutions (Aneco®) are produced on demand. Therefore, the addition of caustic soda is not necessary because the duration becomes more or less irrelevant.
In cases where the duration has to be taken into account, the Aneco® from ANECO® remains an extremely effective biocide up to 24 months and an extremely effective sporicide up to 6 months. 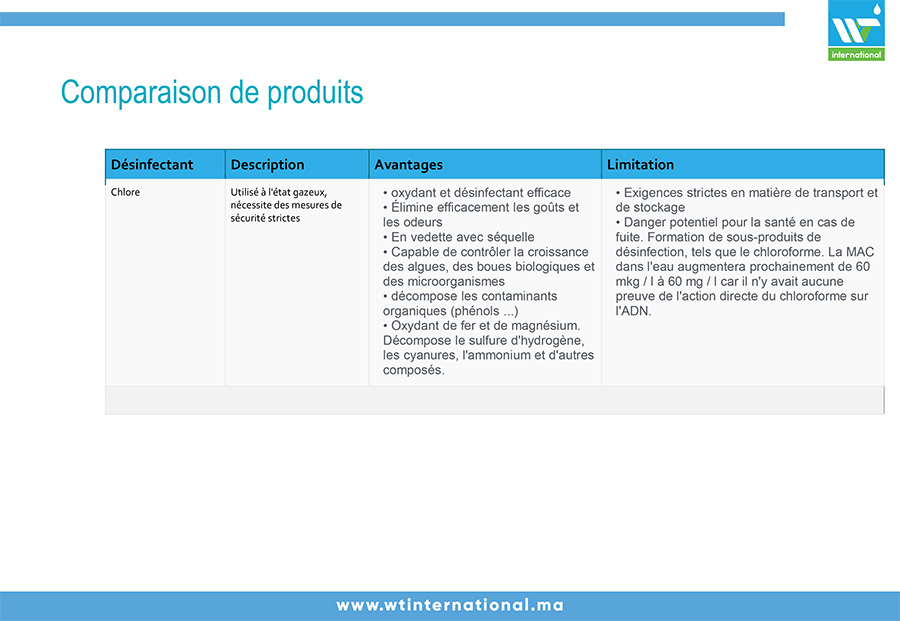 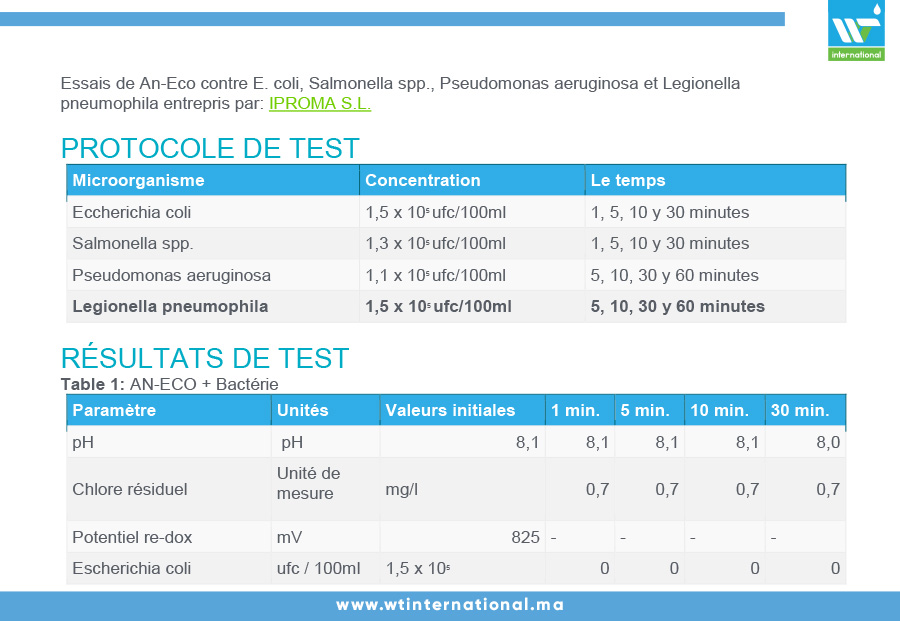 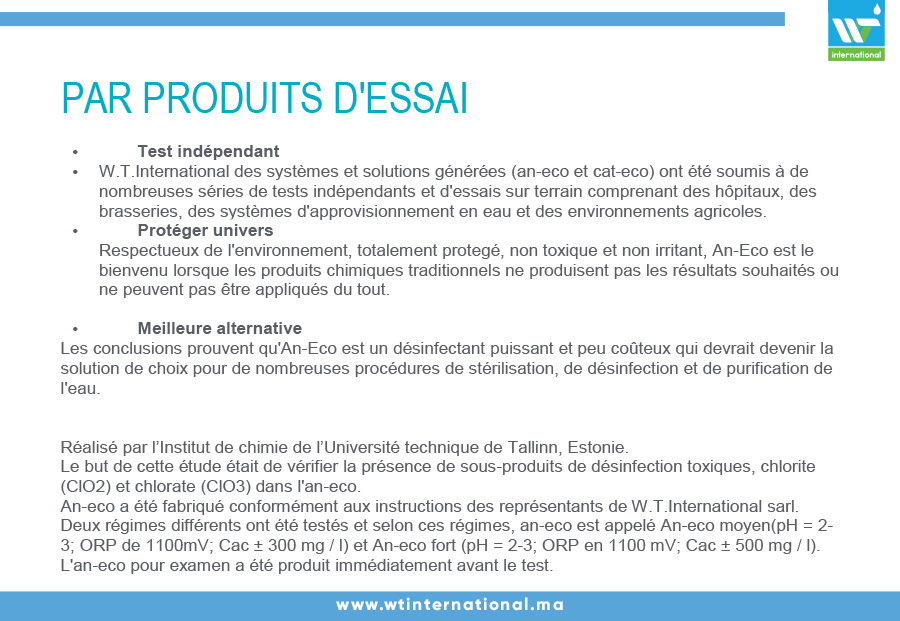 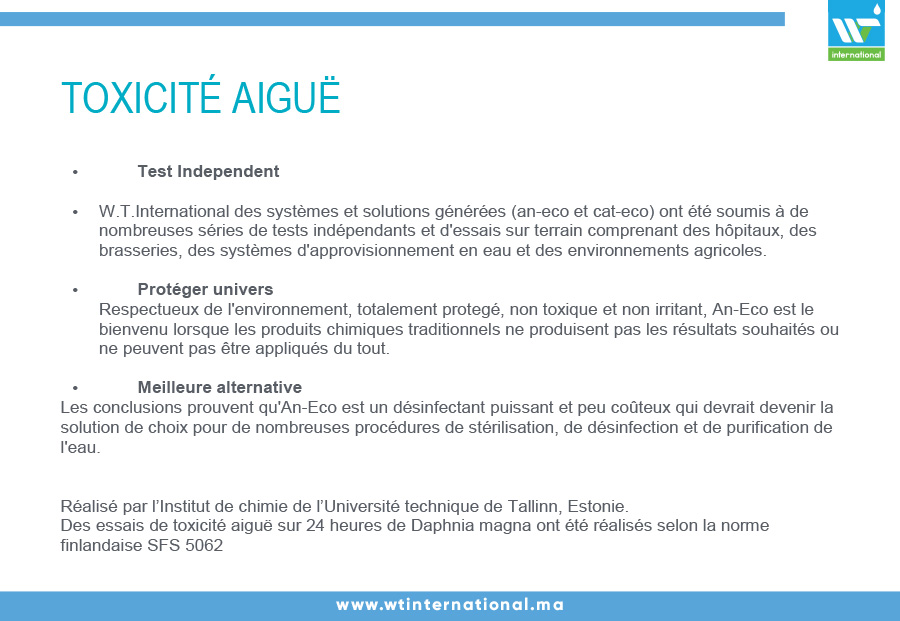 Complete the following form and tell us about your project. We will contact you as soon as possible